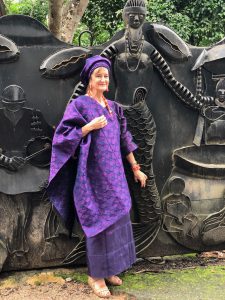 Describe your “connection” to the work and researchers of the DTCRSJ

My connections to the work of DTCRSJ are fourfold: 1) Religion and media, in particular the political economy of religious broadcasting in Africa; 2) Religion and gender in Africa; women’s agency in African-initiated churches and Pentecostal-charismatic movements; coedited special issue of African Journal of Gender and Religion (AJGR) with Dr. Lee-Schae Scharnick-Udemans on media (2019); 3) Human rights, notably cultural and religious rights in relation to minority religious communities, such as indigenous religions and new religious movements and 4) religiously-related conflict in Africa, particularly over the regulation of religious diversity.

What are your current research, teaching and academic service projects?

I have several writing projects that pertain to my research on sound and religion, including a co-edited book, Religious Sounds: Senses, Media and Power Beyond the Global North.  I am also pursuing research projects on the festivalization of religion in Africa and its consequences for religious pluralism.  Furthermore, I have joined forces with two Zimbabwean colleagues to produce an edited volume on Rastafarianism in Africa. As for teaching, I regularly teach undergraduate courses in African Religions, Anthropology of Religion, and Comparison of World Religions at my home institution. This spring, I will be teaching a new course, Religion and Nonprofit Leadership, and organizing a public symposium in conjunction with this new concentration.  In terms of academic service, at the University of Tennessee, I was active for several years on the advisory board of Africana Studies and currently have the status of affiliated faculty in the Disasters, Displacement, and Human Rights Program in the Department of Anthropology. More widely, I serve on the Board of the African Consortium for Law and Religion Studies (ACLARS) and have helped organize their annual conferences in various African countries since 2013.  After twenty years in the leadership of the International Association for the History of Religions (IAHR), as well as the IAHR Women Scholars Network, the African Association for the Study of Religions (AASR) and the North American Association for the Study of Religions (NAASR), I now serve in an advisory role.  I was named to the Academic Council of the Prince Alwaleed Bin Talal Center for Muslim-Christian Understanding, Georgetown University, Washington, DC in 2011.  I also work to promote and defend the Humanities on an international level, particularly in my role as Vice President of the International Council on Philosophy and the Human Sciences (CIPSH) (2014-2020) and as delegate of the American Council of Learned Societies (ACLS) to the Union of International Academies (UAI) (2020-23).

How do you plan to use your new position to enhance research, teaching, and academic service between the Centre and your networks?

Above all, in my new capacity at UWC, I am keen to learn more about the goals of the Centre and the teaching, learning, research and outreach activities of the staff and students. In that regard, I can be a resource and a conduit for DTCRSJ as appropriate, linking UWC students and colleagues to relevant international academic networks, associations, colleagues, resources, and institutions.  By the same token, as a senior scholar with extensive teaching, research, and service experience in diverse settings, I look forward to dialogue, and possibly collaboration, with colleagues and students on new forms of public religion and debates over religious diversity, scholarly activism in response to social injustice, changing practices and ethics of fieldwork, and the future of higher education in an era of neoliberalism.

In what way (s) do you feel your research examines the intersections of and overlaps between religion and social justice?

I consider that my work demonstrates the pressing need to examine the full spectrum of religion’s agency and potency using a range of critical, comparative, and contextual approaches.  Many have written on the “ambivalence of the sacred.”  My interests have focused on the entanglements of religion and the state in various African contexts, either in the form of the politics of the regulation and registration of religious groups or their access to media organizations. Not surprisingly, it is minority and indigenous religions that frequently lack public recognition.  I have also recently explored how female founders and leaders of African new religious communities have appropriated rights talk in their discourses.  In northern Uganda, where I have worked since 2004, I set up the UT Gulu Study and Service Abroad Program (2011-2014) with a colleague in anthropology, to introduce US students to the dynamics of a war-affected region and to promote collaboration with local NGOs and initiatives, notably the Acholi Religious Leaders Peace Initiative, the Gulu Peace Garden Project, and the Lwo Folktales Project.  In addition to short essays on the religious dimensions of the conflict/post-conflict setting in northern Uganda, I have latterly completed an article on “The Soundscape of War and Displacement in Northern Uganda.” I continue to conduct research on the relation between religion and social suffering in the region.

What advice can you offer post-graduate students and emerging scholars?

The contemporary study of religion takes us beyond beliefs and doctrines into what people do and the religious/spiritual worlds they create and inhabit.  These worlds constitute a response to the wider society, whether in terms of acceptance, rejection or transformation.  They provide the symbolic resources and agentive power for individuals and communities to mitigate social suffering and effect human flourishing, just as they may legitimate structural inequalities.  It is precisely these paradoxes and potencies of the phenomenon of religion that call for robust

humanistic and social scientific inquiry in postcolonial Africa.  Students and future scholars of religion must be prepared to articulate the critical, transdisciplinary, and intersectional potential of their field of study.  They need to have the theoretical and methodological skills to analyze the discursive moves both in society and academe to valorize particular religious formations or discount (indigenous) religious traditions as cultural heritage.  But they also need to be aware of prophetic voices and interreligious initiatives, past and present, to generate peace and speak truth to power.  In sum, there is no better time to be studying religion in all its complexities whether at the local, regional, national or global levels!

My appointment as Extraordinary Professor will allow me to assist with the international connectivity and profile of the Centre, but it will also serve to symbiotically deepen and broaden my ties to the South African academic scene.  I have had the privilege of visiting South Africa on a number of occasions since 1997.  I attended the Parliament of the World’s Religions in Cape Town in 1999 and helped organize the first ever World Congress of the International Association for the History of Religions (IAHR) in Africa, in Durban, 2000.  2014 was a bumper year in that I presented at the second conference of the African Consortium on Law and Religion Studies (ACLARS) in Stellenbosch, at the African Association for the Study of Religions (AASR) in Cape Town, and enjoyed a one-month stint as an A. W. Mellon Fellow in the Department of Religious Studies, University of Cape Town.  I have served on numerous occasions as an external examiner to several South African universities.  I look forward greatly to the new opportunities for research and teaching collaboration that this professorship will afford.